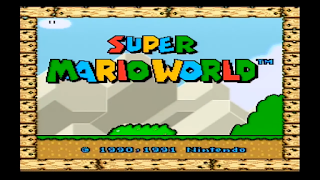 Super Mario World, released for the SNES in 1990 as a launch title and developed by Nintendo, is my second favorite game of all time. A follow up to the last main line Mario game Super Mario Bros. 3., Super Mario World (SMW) builds upon the game play of the previous titles by using familiar gimmicks such splitting the levels into separate worlds in which the player can choose which levels they play in which order, using many familiar power ups in the Mushroom and Fire Flower, and ending each world with a fight with one of Bowser's children.


However, new additions allow the game provide a fresh experience for players of the previous games in the series. The biggest addition is the Mario game debut of Mario's dinosaur companion, Yoshi. Hatching a Yoshi egg allows Mario to ride the dinosaur and command Yoshi to eat enemies, fruit and gain new abilities when they eat the shells of the Koopa Troopas. The shells correspond to the powers of the colored Yoshi's: blue grows wings and allows for flight, red spits three fireballs, and yellow creates stops that takes out areas around the player.

The main new power up, an upgrade to the Super Leaf, the Cape Feather allows Mario to fly over stages and frees Mario to take new heights. This new ability allows the game to experiment with new secret exits that provide alternate paths through the level to promote re-playability. These alternate paths allow for more difficult levels to be gated behind the player proving their skill in finding the secret exits and challenges them to new Fortresses and a Special World that has the hardest challenges in the game (Special consideration to the Speical World level Tubular as being particularly difficult).

Compared to the other games, SMW is overall a simpler and shorter game. SMW has only 72 levels compared to the 90 of Super Mario Bros. 3 and the 120 stars in Super Mario 64 and Super Mario Galaxy, notwithstanding the open world Super Mario Odyssey. It also has less overall mechanics in that it doesn't have the 3d aspect of the next game and loses some of the unique power ups from Super Mario Bros. 3 (Frog Suit, Tanooki Suit, the Hammer Bros. Suit, Magic Flute, etc). While this doesn't diminish the overall fun, it does indicate that the 16 bit entry played it safe as an introduction to the new at the time system.

In conclusion, Super Mario World is a great game that is a staple for the Super Nintendo. The game introduces new mechanics and characters that allow the player to fully exercise their platforming muscles while never being too difficult to finish. While never reaching the highs of other entries of the Mario series (i.e. Super Mario Bros. 3, Galaxy and Odyssey), it still provides a satisfactory experience in which all ages will be able to fully grasp.