Trine is a action-platforming game, developed by Frozenbyte Inc. and published by Nobilis Group, originally released on July 3, 2009 for the PC. A multi-platform re-release, called Trine: Enchanted Edition, was released in 2014 which is the version played for this review. Frozenbyte has released sequels in 2011, Trine 2, and 2015, Trine 3: The Artifacts of Power and are currently working on a fourth game, Trine 4: The Nightmare Prince. 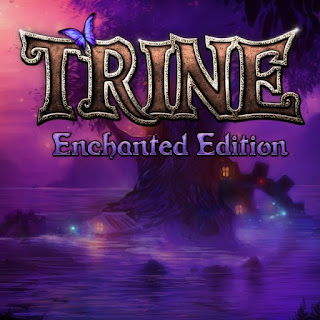 Trine: Enchanted Edition follows three characters a thief, a knight, and a wizard who are soul joined by an artifact called the Trine. As the characters try to undo the joining, they learn that the Trine is only one of three artifacts that maintain the balance and peace in the land. An old king had stolen two of the artifacts and, while trying to use the artifacts power, destroys the balance and corrupts himself and the land. The old king then raises an undead army to search for the Trine so he can complete the collection and gain ultimate power. The heroes, after seeing the devastation that the old king caused, decide to defeat the old king, reunite the artifacts and purify the land.

During their journey, only one of the three characters to be playable at one time and the player can swap between them at any time to get around obstacles or defeat enemies. Each character has it's own strength: first, the Thief has a bow and arrow they can use to destroy enemies or shoot flames to light distant torches; next, the Wizard can conjure planks and boxes and then use telekinesis to move boxes and planks around to platform on; finally, the Knight uses his sword and hammer to break objects and smash enemies. Knowing when to switch between the three to overcome obstacles and activate switches is key to being able to move efficiently through the game.

Trine is broken up into fifteen main levels and one epilogue level where each level represents a different area the trio travels through on his journey. The heroes start off at the Astral Academy where the Trine is stored, through the underground caves and crypts to the Lost King's castle. There they evidence of the old king's corruption and clues to the where the other two artifacts are stored. After leaving the decrepit castle, they travel through the forest and find that the first artifact was unsealed by an earthquake and stolen by the old king. They make their way through an abandoned city the mines beyond until they get to the foot of the old king's stronghold, the Tower of Sarek. They navigate through the Iron Forge at the base of the tower and infiltrate up to the top where they defeat the old king and return the land to it's previous greatness.

As the player travels through each of the levels, the player can find chests. An ability or equipment items are stored in those chests. Abilities are specific to each character and give the character new ways of overcoming the platforming challenges. For example, the Wizard starts by being able to conjure a box. Then after finding the ability chests, he can conjure planks or floating platforms as well. These abilities can be improved  by finding experience through defeating enemies or collecting green experience bottles. When the player gathers enough experience, i.e. 50 experience points, the player can upgrade one of the heroes abilities to increase the effectiveness of that specific ability. The chests can also hold inventory items that can be assigned to one of the heroes. These items upgrade the heroes by augmenting the abilities they gain, increase the healing that they gain or reduce damage.

Overall, Trine is a solid platformer that isn't too special from previous games in the genre. It's unique twist of switching between three character is novel and provides a good secondary challenge in trying to make sure that the hero's abilities are appropriately used. Some of the platforming challenges can be difficult but if the player is familiar with action-platformers then they should be able to overcome them with some though. I would recommend this to anyone who likes platformers and wants a new one or wants a solid gameplay experience with minimal story. However, I wouldn't look at this game as being particular innovative in the platforming experience itself.

By William Pickett July 22, 2019
Entering the next area, Krem Quay, Diddy and Dixie travel through the swamp to start their ascent up Crocodile Island. This world has us traveling through a perilous bayou using rotatable timed barrels and crocodile head to  travel around a sunken ship (again calling back to the game's pirate theme) to get to the other side of the quay to meet the boss, Kudgel. This area contains 7 levels: two dedicated bayou levels, Barrel Bayou and Krockhead Klamber, to handle the horizontal platforming; one underwater level, Glimmer's Galleon, which uses limited lighting to create a feeling of suspense as they travel through the sunken ship; and, finally, one vertical platforming level in Slime Climb. This world also introduces two new level types: Animal Buddy Levels in the form of Rattle Battle, and Bramble Levels, i.e. Bramble Blast. Animal Buddy levels transform the Kongs into the Animal Buddy and has that animal buddy travel through the level with the addition their specific power s
Post a Comment
Read more