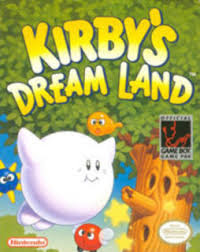 Kirby's Dream Land is a Nintendo Game Boy action-platformer developed by HAL Laboratories and published by Nintendo. Masahiro Sakurai designed this game to be an introduction to the genre that allows beginning players to ease into learning the basic mechanics while not stressing out over staying alive.

In this game, the self proclaimed King Dedede has gone out and stole all of the foot in Dream Land. Kirby has to travel through four levels to get to King Dedede's palace and defeat him to return the food to the good citizens of Dream Land.

In each level, the player must travel through several different scenes to reach an end boss that they must defeat before moving on to the next level. To combat the enemies that try to impede Kirby, Kirby can inhale and draw the enemy or other obstacle into his mouth. Then the player can decide to either swallow it or spit it out to damage other enemies or destroy blocks in the way.

To help the player jump up to high platforms or recover from falling into pits, Kirby can inhale air and fly. This provides the game with a good safety feature that allows inexperienced players to be able to prevents Kirby from dying as much as possible and lets the player have more control especially after being damaged by an enemy.

Each level is themed differently and while the enemies are often the same in each level (a shortcoming in that there are not a lot of enemy types that the game provides) the setting does immerse the player into the level. Each level starts with a cute intro skit that humorously introduces the theme by showing Kirby interact with parts of the scenery. The levels have appropriate backgrounds that tie into the level and the music, while simple, does lend itself to setting the appropriate mood that the player should feel in the level.

Kirby starts in the level Green Greens, a nature based level that is set in a forest. This level introduces Kirby to the different types of platforming. The first type is horizontal platforming. In this type of platforming, the player is required to negotiate up and down hills and across bottomless pits along with avoiding enemies that block their progress.

At the end of Green Greens, we meet the first boss, Whispy Woods. The large tree blocks your way and drops its apples that you inhale and throw at the boss's face. The next three levels play out similarly with each boss guarding the exit of the level: Castle Lololo is commanded by the pair Lololo & Lalala (as seen from the game Adventures of Lololo), Float Island's skies are guarded by the menacing blimp Kaboola, and the Bubbly Clouds are guarded by the crackling Kracko.

Finally, Kirby and the player reaches King Dedede and his castle for the final showdown. However, before Kirby can fight Dedede he must travel through abbreviated versions of each level before re-fighting the boss for that level. After all for bosses are defeated again, Kirby then challenges Dedede where he must avoid being jumped on, hammered into the ground or inhaled. After certain attacks, a star will appear next to Dedede and Kirby must inhale and spit that star out at Dedede to damage him. After Dedede's life bar is depleated he is expelled from the castle and Kirby turns into a hot air balloon to return the food to the residence of Dream Land.

Overall, this game is a good introduction to the action platforming genre. If you're inexperienced in this type of game then it will give you a gentle introduction that allows you easy wins to keep you moving forward. However, anyone that has played any other game in this genre will find this game to be very easy and short. Kirby has a limited move set that, while later games build up more movies, unfortunately make the game too simple for any kind of experienced gamer to enjoy picking up unless they were looking for a nostalgia playthrough or wanted to play each Kirby game.